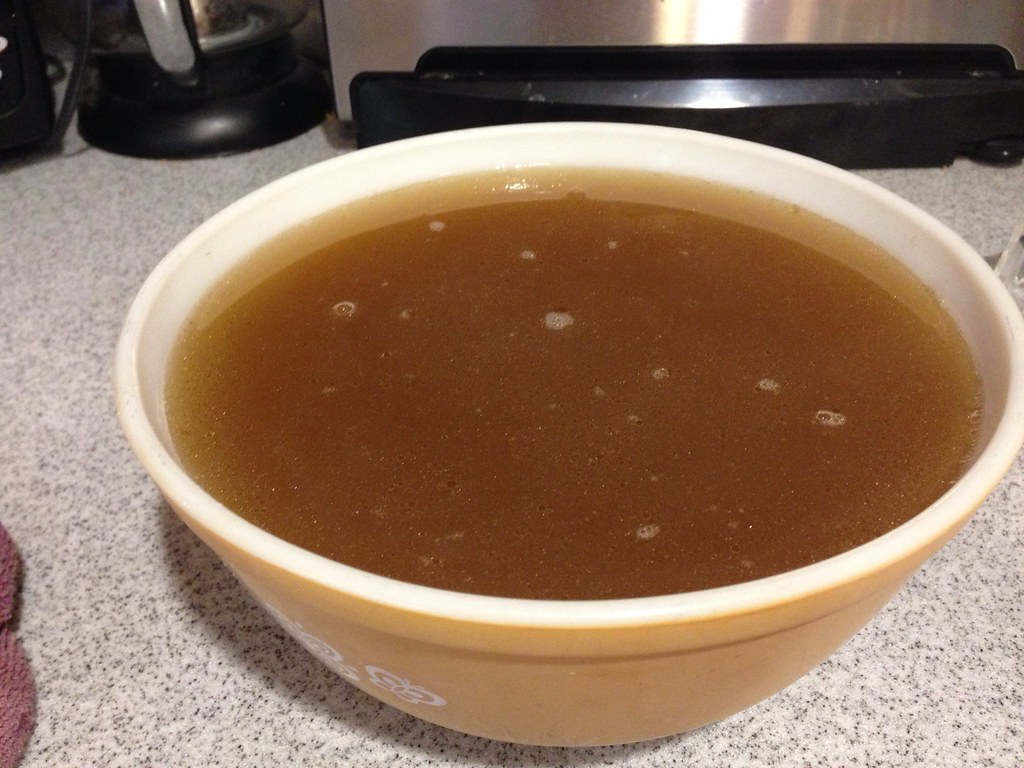 Is bone broth good for cats? The answer is a definitive yes!

Cats should never be allowed to chew on bones, particularly poultry bones. However, boiling leftover bones in order to make a broth provides your kitty with a wide variety of health benefits. Best of all, your cat will love the taste of food that is covered in broth.

The benefits of bone broth to humans are well-known, and eating broth is a practice hailed by both Western physicians and Chines medicine. Humans have eaten broth to calm upset stomach, help stave the symptoms of a cold, and to prevent inflammation in cells. The British have a tradition of sipping “beef tea,” which is another type of bone broth. If we know that broth is good for humans, imagine what it can do for our feline friends!

Next, bone broth aids in digestion and improves the health of the digestive tract. Collagen is an ingredient in bone broth, and this mineral helps to push undigested food from the intestines. It also strengthens the lining of the intestines to bacteria does not flourish in the gut.

Third, bone broth is known to strengthen the immune system. Just as chicken soup (which contains a great deal of broth) is good for a cold, bone broth prepared properly and poured over your cat’s food provides vitamins and minerals which boost your cat’s immunity. Furthermore, the marrow that is present in the bone, even after it is boiled down, will promote the delivery of oxygen to the body’s cells. This also aids in strengthening your cat’s immune system.

Bone broth is a great dietary supplement for cats of all ages, but particularly older cats. There are numerous minerals that are present in broth, but magnesium and glucosamine are two that are widely known to promote joint health. Cats with arthritis or other joint health issues can experience great relief just by consuming bone broth a few times a week.

Speaking of bone and joint health, regular consumption of bone broth provides your cat with significant amounts of calcium and phosphorus. These minerals are integral in helping your cat to develop and maintain healthy teeth. Furthermore, they are essential in developing the skeleton and maintaining its strength. If your cat should experience some type of damage to his or her bones, regular consumption of bone broth will aid in the healing of your cat’s injuries.

The minerals phosphorus and calcium promote healthy energy in your feline friend as well.

Bone broth is also indicated for cats with poor appetites. The taste of broth poured over commercially made dry cat food often attracts even the most finicky kitty. Furthermore, if your cat has food allergies or sensitivities, bone broth is perfect as a nutritional aid. Again, bone broth is easy to digest in addition to boosting digestive health.

Preparing Bone Broth for Your Cat

The actual preparation of bone broth is not very complicated, but it is time-consuming. One necessary ingredient in the bone broth-making process is a slow cooker. Otherwise, you’ll find yourself standing over a large pot on the stove for nearly twenty-four hours. If you’re using poultry (chicken or turkey), make sure that you remove the longer, sharp leg bones that could get fragmented and ingested by your cat.

Place the bones in the slow cooker, and fill the pot with enough water to cover the bones. Be sure to measure how many gallons your slow cooker holds, and try to estimate how many gallons you have filling the pot. For every gallon, add two teaspoons of either lemon juice or apple cider vinegar. Either of these ingredients is fine (neither is better than the other). Lemon juice and apple cider both do the same thing to the bones. The acids in these liquids both work to break down the bones and aid in releasing the minerals inside the bone marrow.

You may find any number of recipes for making bone broth, but most follow the same guidelines: long cook times and using an acidic liquid to help soften the bones and release the nutrients within the marrow. A great way to add to the flavor of your bone broth is to add vegetables and seasonings. You can start by slicing carrots and adding them to the water and bones. However,you must keep in mind that some seasonings are toxic to cats. These include chives, onions, and scallions.

You can add peas, celery, and green bell peppers to the list of safe vegetables for felines.

At the end of this cooking, skim the residual fat off the top of the broth. Then, remove the bones from the water, and throw them out away from areas where your cat might be tempted to chew on them. Turn off the slow cooker, and allow the broth to cool completely. By now, you may have over fifty hours invested in just cooking the broth!

Once the broth has cooled, you can either pour it into small containers that you can store in the freezer, or you can put the broth in ice cube trays, freeze it, and pop a cube out two or three times a week as a treat for your kitty. You can reserve some in the fridge to pour over commercially made dry cat food to promote finicky cats’ eating pleasure.

Bone broth is not only tasty to your cat, but it is also quite nutritious.

KittyCatTree.com is a participant in the Amazon Services LLC Associates Program, an affiliate advertising program designed to provide a means for sites to earn advertising fees by advertising and linking to amazon.com